Led by Uber’s private market valuation of $68 billion, the list of private companies with a valuation of at least $1 billion has grown to 185 with a combined valuation of $644 billion.[endnote symbol=’1′ text=’CBInsights.com “Complete List of Unicorn Companies 10/25/16′] Private companies carrying such a high valuation have earned the moniker “unicorns,” presumably a reflection of how rare this valuation level once was. However, the rarity of these creatures seems to be lessening by the day.

To understand why the herd of unicorns has grown so rapidly, one needs only to look at the easy access to capital that has been prevalent over the past several years. For starters, the amount of venture capital raised in recent years has been at historic highs. Chart 1 illustrates that the past three years of VC and Growth Equity fundraising levels have been the highest in more than a decade. Joining the pack were nontraditional VC investors, such as hedge funds and corporate sponsored VCs that contributed to the recent high private valuations, presumably chasing the potentially high returns in the asset class. 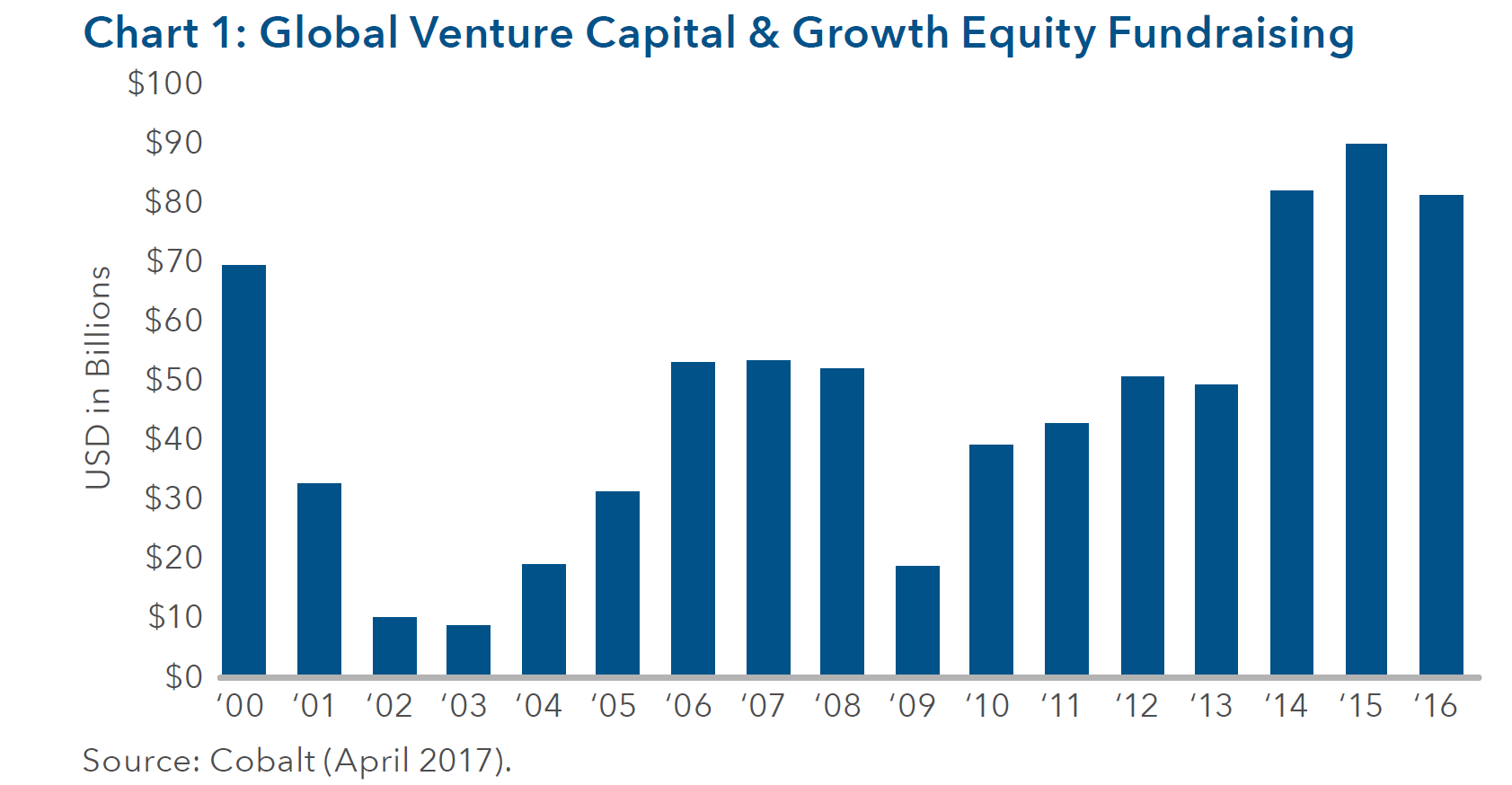 Distribution levels looked better and better almost every year since 2010 (Chart 2); however, what really attracted investors were the high returns being generated (Chart 3). The 3-year trailing return figure for VC funds was 16.2% as of September 30, 2016, well above Buyout strategies at around 9-13%. Despite VC’s low liquidity compared to other strategies, fundraising in the space continued at such a torrid pace largely off the back of sizeable unrealized returns. The number of large VC funds being raised has grown in recent years. While the total number of VC funds raised has declined over the past two years, the number of firms raising $1 billion or more totaled seven in 2016, with those funds collecting more than 23% of the total commitments raised.[endnote symbol=’2′ text=’Naional Venture Capital Association / PitchBook “Venture Monitor” 4Q 2016′] 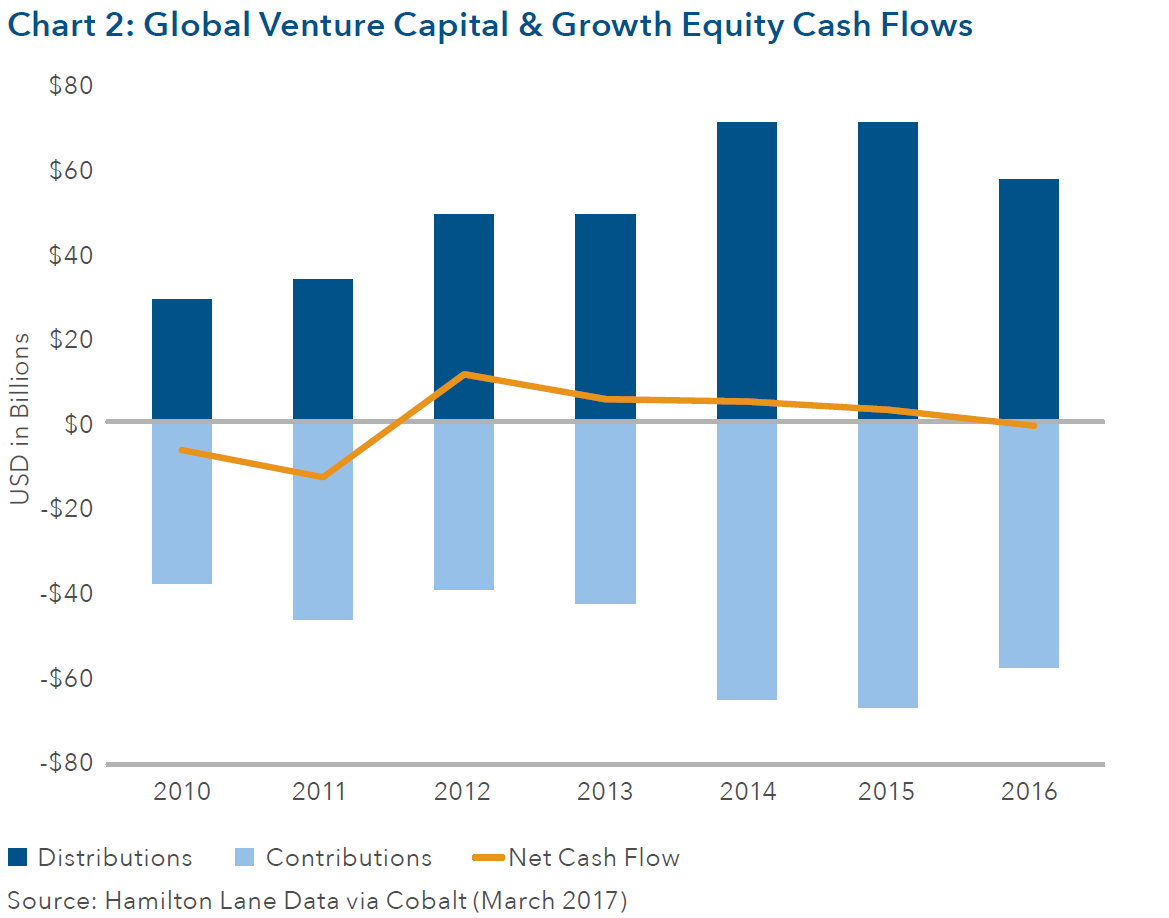 The rapid pace of innovation has also encouraged corporations to seek more cost-effective alternatives to M&A, or in-house R&D, to grow their businesses. In just the past four years, corporate venture capital has grown rapidly. The percentage of VC deals that included some corporate venture capital grew to 13.4% in 2016; at the same time, the number of active corporate VC investors grew to 933, a doubling from the figure seen in 2009.[endnote symbol=’3′ text=’National Venture Capital Association / PitchBook “Venture Monitor” 4Q 2016′] 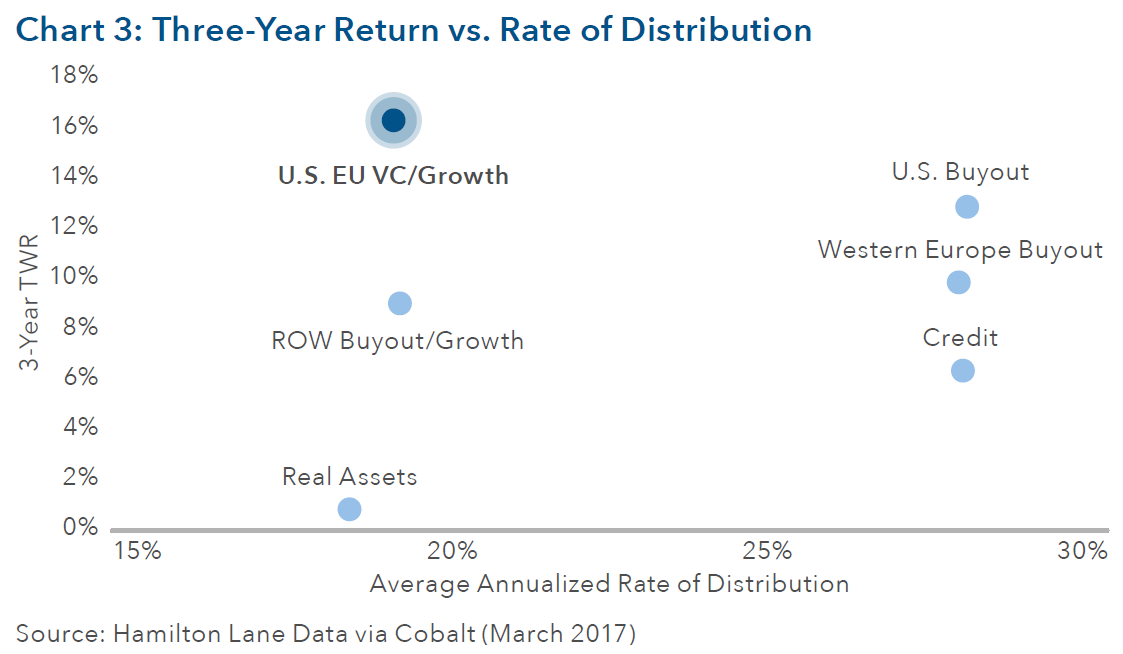 Rise of the Unicorns

With hugely successful fundraising and the growing number of venture capital participants, there has been another factor in play, which can take some credit for creating this unicorn phenomenon. Costs and regulatory burdens involved with going public have been steadily increasing. Combined with the lack of “street” support for some of the smaller, less known initial public offerings, these forces conspired to keep companies private longer. While the average age of a company going public in 1999 was just over two years, that figure had risen to 8+ years in the fourth quarter of 2016.[endnote symbol=’4′ text=’Thomson One Analytics’] Chart 4 highlights the drop off in VC-backed IPOs beginning in 2001 following the dot-com bubble of the late 1990’s.

Recently, however, there have been multiple events and trends to suggest that the stable of unicorns may have peaked. Early 2015 witnessed the first examples of unicorns experiencing a down-round with their IPOs – meaning the valuation attached to the company at the time of its IPO was below the valuation during its last round of private financing. Beginning in December of 2014, we witnessed Hortonworks’ IPO price below its prior round, followed by Box in January 2015 and Square later that same year. All had been prominent members of the unicorn club and all went public at a valuation below their last private financing round.

Due in part to the fear of experiencing down-rounds, the market saw the growing use of liquidation preferences and other anti-dilution provisions, such as “ratchets.” Designed so that late-round private investors are not disadvantaged by a low-priced IPO, ratchets protect investors with minimum return guarantees. Perhaps the most notable recent example of the impact ratchets can have on investors was the November 2015 IPO of Square, Inc. Roughly one year before Square’s IPO, the company raised $150 million in its late-stage series E round. The Company’s S-1 filing indicated that investors in that round paid $15.46 per share. In addition, those investors were protected by a ratchet that guaranteed them at least a 20% return on their investment. Square ultimately priced its IPO at $9.00 a share, well below the initial guidance range of $11.00 to $13.00.

As a result, Square was required to issue an additional estimated 10.3 million shares to get the series E investors back to the $18.56 per share guaranteed valuation level. Of course, all of the investors in earlier financing rounds, including Square’s employees saw their investments significantly diluted due to this ratchet provision.[endnote symbol=’5′ text=’Square, Inc. S-1 Filing’]

Perhaps those events marked the inflection point, as we witnessed a 33% decline in VC investments from from $36.1B in 2015 to $24.0B in 2016.[endnote symbol=’6′ text=’Hamilton Lane Data via Cobalt’] In addition, exits via an IPO declined significantly for VC-backed companies in 2016, totaling just 39 down from the prior year’s total of 77. [endnote symbol=’7′ text=’National Venture Capital Association / PitchBook “Venture Monitor” 4Q 2016′]

This contraction of new capital and IPO exit events has led VC firms to encourage their portfolio companies to cut expenses, thereby bringing down their cash burn rates, with the thought that the next round of private financing may never come. Presumably recalling the dot-com implosion of 2000, the result of this has been a new focus on profits in the Silicon Valley, where many startups began to cut expenses through some highly visible layoffs.[endnote symbol=’8′ text='”A Chill Sets In: Looking Back on the Year in VC” by Mikey Tom for Pitchbook December 28, 2016′]

In recent headlines, AppDynamics was taken out by Cisco Systems for $3.7 billion on the eve of its IPO pricing. This was a highly anticipated, large technology company IPO that was viewed as an early test of investor appetite for IPOs in 2017. Cisco’s offer equated to a $26 per share valuation versus the estimated IPO pricing range of $12 to $14 and exceeded AppDynamics’ last private valuation of $1.9 billion.[endnote symbol=’11’ text=’Cisco Systems press release, January 25, 2017. AppDynamics SECS-1 filing’]

Looking ahead, we are encouraged by the recent M&A activity involving venture-backed companies and believe that the valuations of many of the unicorns will hold up. The dearth of venture-backed IPOs in 2016 could put more pressure on those unicorns that do not have the option of an exit through M&A to go public in 2017. Additionally, we believe this environment decreases the likelihood of follow-on private financing rounds from venture backers.

After the near-miss of an AppDynamics IPO, Snap, Inc. moved to center-stage as the first major test of investor appetite for unicorn IPOs. The early result would certainly offer hope that the IPO window may once again be open. Originally targeting a pricing range of $14.00 to $16.00, the deal was ultimately priced on March 1 at $17.00, giving the company a market capitalization of just below $20 billion. Even with this extended valuation, the stock trading volume on the first day exceeded 217 million shares with the stock closing up 44% at $24.48. On the second day of trading, Snap extended its gains an additional 11%, closing at $27.09 a share for a market capitalization of more than $31 billion.[endnote symbol=’12’ text=’FactSet’]

While the initial reception of the Snap IPO can be read as a positive, the risk remains that the same fate awaits the stock as we saw with another high-profile over-valued IPO – Facebook. Similarly, Facebook’s May 18, 2012 IPO was well received, trading up 40% on the first day to close at $38.23. However, this richly-priced offering experienced trouble maintaining its early valuation and did not reclaim its first-day high until nearly 15-months later. This result ultimately had a chilling effect on IPO activity, potentially stalling the exits for many other deserving companies. Already Snap’s valuation is being called into question by the sell-side, with some initiation reports placing a “sell” recommendation on the stock.[endnote symbol=’13’ text=’FactSet’] As we move forward, we believe the stability of this bell-weather’s stock price will prove to be extremely important for the health of the IPO market as a whole and particularly for the stable of remaining unicorns.

To learn more about integrating Cobalt LP with your team, reach out to us here.